C.P.R.E partner with Hanwell Nature in their Campaign to create 10 new London Parks.

The Campaign for Protection of Rural England London (C.P.R.E), have been a long term supporter of Warren Farm. In fact their lead Alice Roberts first case was the Warren Farm Campaign, 9 years ago.  Since then she has continued to support saving Warren Farm, and does incredible work linking  groups together that might be able to help each other. Through her introduction in July 2020 Hanwell Nature were asked if we could share campaign knowledge with another campaign, and we were able to share intel and help suggest economical ways to flight legally, putting them in touch with our legal team. This is the sort of excellent networking CPRE London, actively offer when helping different campaigns.

Back in August 2020 Alice reached out to Samantha at Hanwell Nature again, this time with the idea of creating 10 new London Parks and wanted to know if we wanted to include Warren Farm, of course we jumped at the chance. 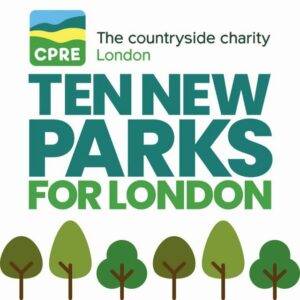 Here is the map.  “Hanwell Nature Reserve” is indicated in the purple circle above and the other 7 parks positions in the white circles. 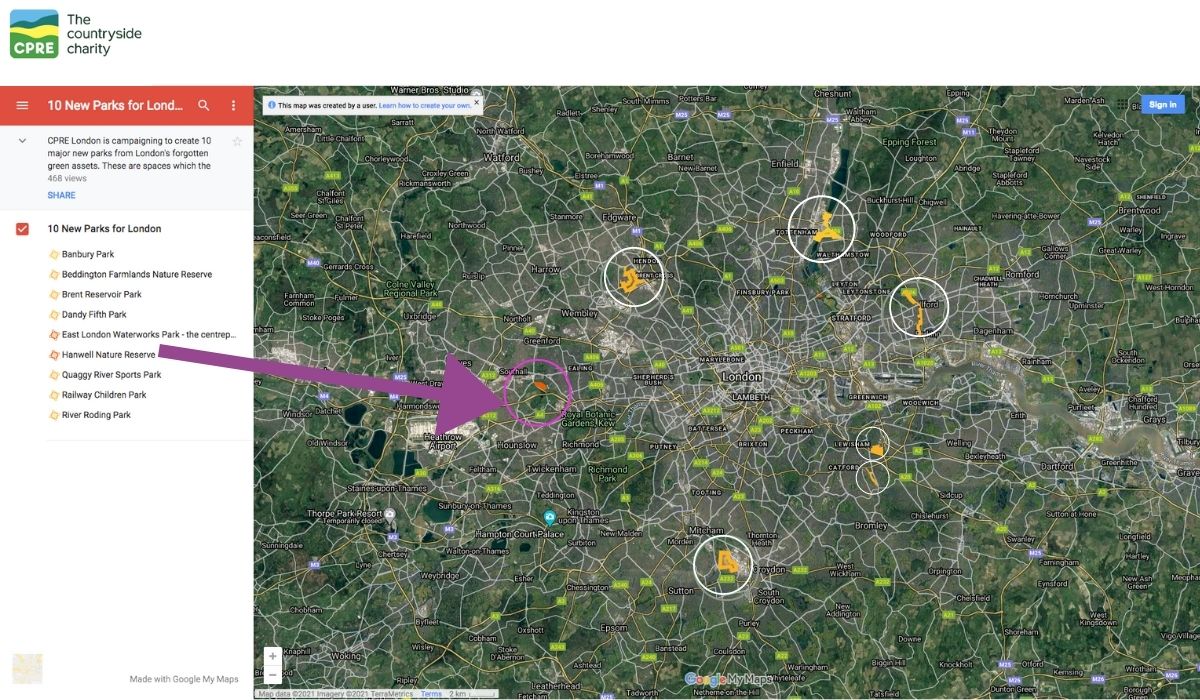 Link to a bigger version of the map here > 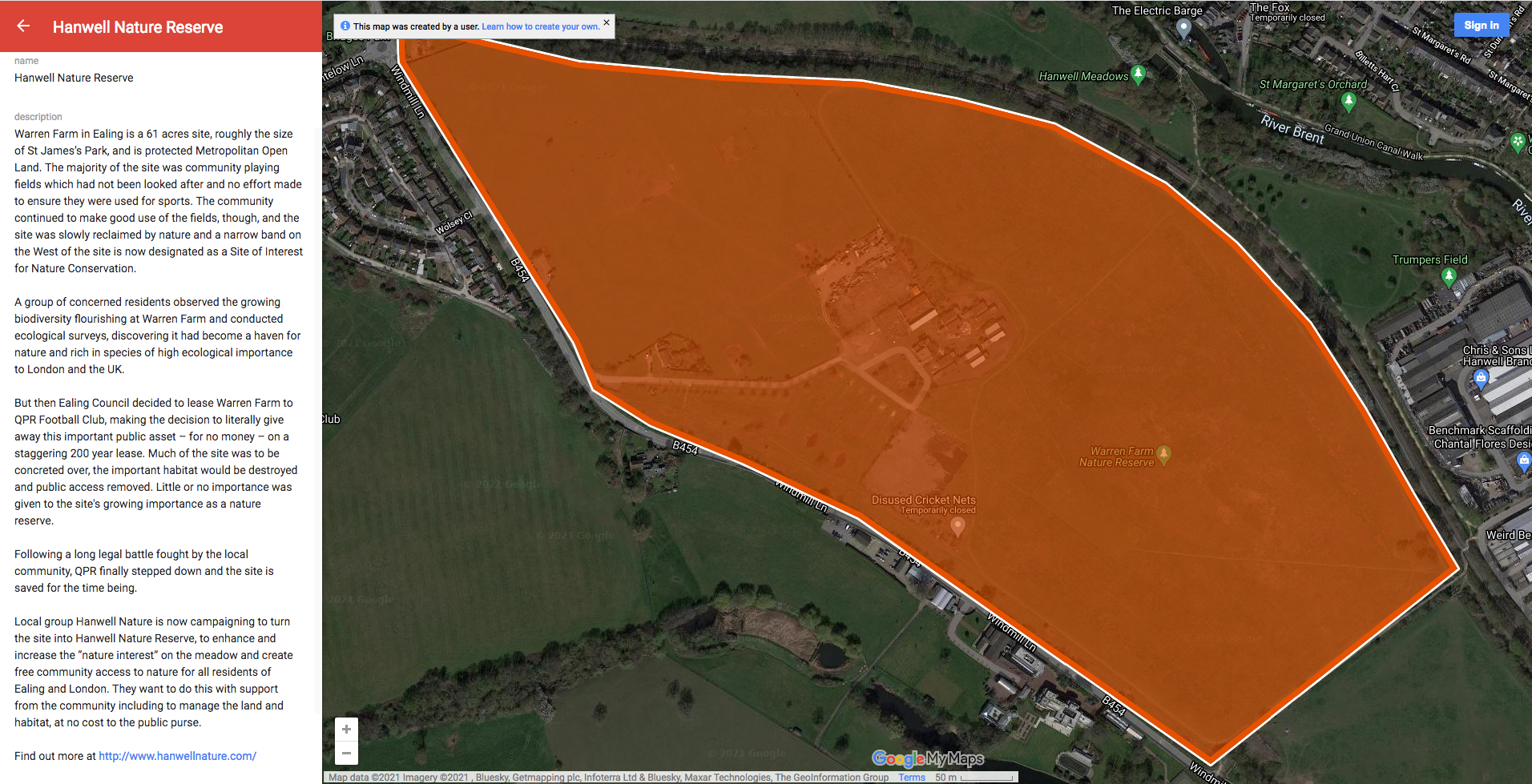 For those not on Iphone or  I pad the accompanying text on the side bar is repeated below:-

Warren Farm in Ealing is a 61 acres site, roughly the size of St James’s Park, and is protected Metropolitan Open Land. The majority of the site was community playing fields which had not been looked after and no effort made to ensure they were used for sports. The community continued to make good use of the fields, though, and the site was slowly reclaimed by nature and a narrow band on the West of the site is now designated as a Site of Interest for Nature Conservation.

A group of concerned residents observed the growing biodiversity flourishing at Warren Farm and conducted ecological surveys, discovering it had become a haven for nature and rich in species of high ecological importance to London and the UK.

But then Ealing Council decided to lease Warren Farm to QPR Football Club, making the decision to literally give away this important public asset – for no money – on a staggering 200 year lease. Much of the site was to be concreted over, the important habitat would be destroyed and public access removed. Little or no importance was given to the site’s growing importance as a nature reserve.

Following a long legal battle fought by the local community, QPR finally stepped down and the site is saved for the time being.

Local group Hanwell Nature is now campaigning to turn the site into Hanwell Nature Reserve, to enhance and increase the “nature interest” on the meadow and create free community access to nature for all residents of Ealing and London. They want to do this with support from the community including to manage the land and habitat, at no cost to the public purse.

Find out more at http://www.hanwellnature.com/

“London has just half the green space it needs for a population its size. And yet there are so many green spaces in London which are just sitting idle – at best ignored by the authorities, at worst deliberately run down, fenced off by owners and coming under threat from development.

“These kinds of sites are frequently subject to a cycle of decline. But they could provide huge benefits for the community were they to become a local park and managed effectively.

“So we’re launching a major new campaign alongside local community groups to create Ten New Parks from London’s forgotten green assets. Details of the first eight ‘New Parks’ proposals are on our website.

“One of the sites, a huge set of community playing fields at Warren Farm in Ealing, became so run down the council which owns it simply gave up and nearly gave it away. At another, Beddington Farmlands in Sutton, the owners were meant to create a major new nature reserve but have simply failed to fulfil the terms of their planning permission, so the whole area remains closed to the public and nature is declining rather than returning.

“Every story is different. But the really amazing thing is that local community groups have come forward to say they want to transform these sites into new public parks, nature reserves, playing fields and much more. People are angered at seeing green spaces neglected, especially at this time when there are so many reports about the importance of access to greenspace during the pandemic. But they’re also ready and willing to work with councils and the London Mayor to bring sites back into use. We want to help them do that.

“We want to gain commitments from the Mayor of London and the relevant boroughs to work with local groups to transform these spaces into useful new parks. Some of these areas can become nature reserves; some can become improved sports facilities; some can be traditional parks. Some are so large they can be all of these.

“We’re also asking Londoners to come forward and tell us about other green sites which are being neglected and could become new parks.”

Local and long-time campaigner for Warren Farm Samantha O’Connor, said: “Ealing Council ceased maintaining this 64-acre site as community playing fields in 2004, since then nature has been reclaiming the land and Warren Farm has become an extraordinary and humbling example of urban re-wilding, on a grand scale.

It is now a vital green asset used daily by many and was voted in the top 4 best loved green spaces in London, when the public voted for UK’s Best Park.in 2019. This precious meadow has many identified rare and protected species of plants and wildlife and is a haven for residents and nature alike. It is of high ecological importance to London and the UK and we must keep it that way.

Ealing Council decided to lease Warren Farm to QPR Football Club, making the decision to literally give away this important public asset for no money on a long 200-year lease. A ten month landfill program was planned to level the site to create a private training ground, destroying this important habitat, and fencing off the site from free open public use.

A series of legal challenges failed, but a final legal challenge on the grounds of requiring an Environmental Impact Assessment in 2019 ended the long nine-year battle, QPR finally stepped down and the site is saved for the time being.

We’re now campaigning and reaching out to include and unite all nature groups and individuals who feel passionate about creating a Community Nature Reserve, to enhance and increase the nature interest on the meadow with free open access for all residents of Ealing and London. We want to do this with support from the community, including to manage the land and habitat, at no cost to the public purse.”

Hanwell Nature are thrilled to be working with CPRE on this visionary plan.

A big thank you to Alice Roberts for supporting Warren Farm, getting this message out to a wider audience.  Every bit helps. 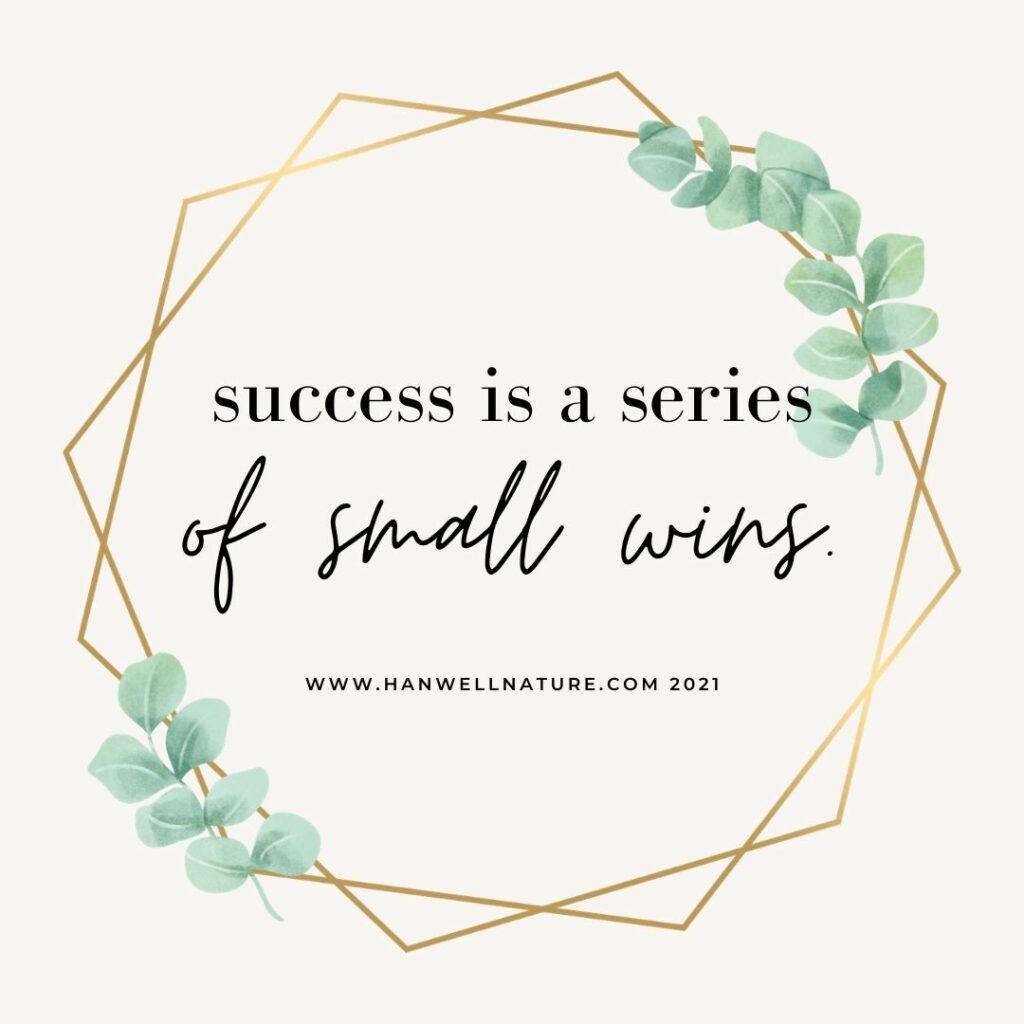